I wrote a 5-stage pipelined MIPS processor as part of a computer architecture class at CMU. It includes forwarding, branch prediction, exception handling, user and kernel modes, virtual memory, and a TLB. I also wrote a small kernel in assembly supporting system calls, exception handling, and TLB management. The full source can be found on GitHub.

A pipelined 5 stage RISC processor (like MIPS) has a Fetch, Decode, Execute, Memory, and Writeback stage. Each instruction goes through each stage, and at any time there are at most 5 instructions being executed at once (one per stage). Below is a high level schematic of the processor. Complex elements have been separated and I elaborate on their functionality below. A full resolution schematic is also available. 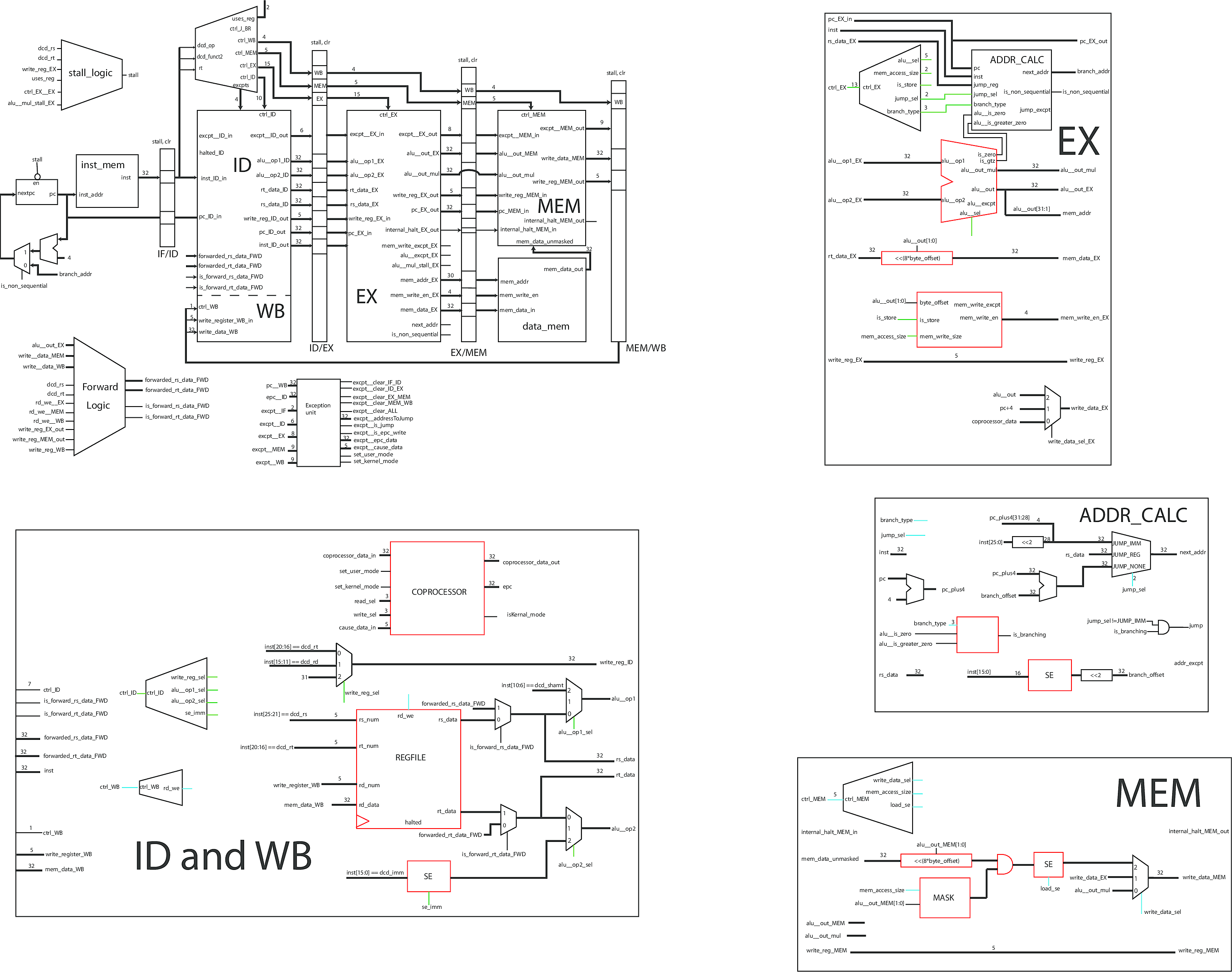 The MIPS core (source) is the top-level module where everything is wired together. It instantiates the pipeline registers, which are the long, narrow boxes. These allow the processor to work on multiple instructions simultaneously. Between the registers are the different stages, Fetch (inst_mem), Decode (ID), Execute (EX), Memory (MEM), and Writeback (WB). The core keeps track of one of the most important states in any processor, the program counter, which is the memory address of the next instruction. 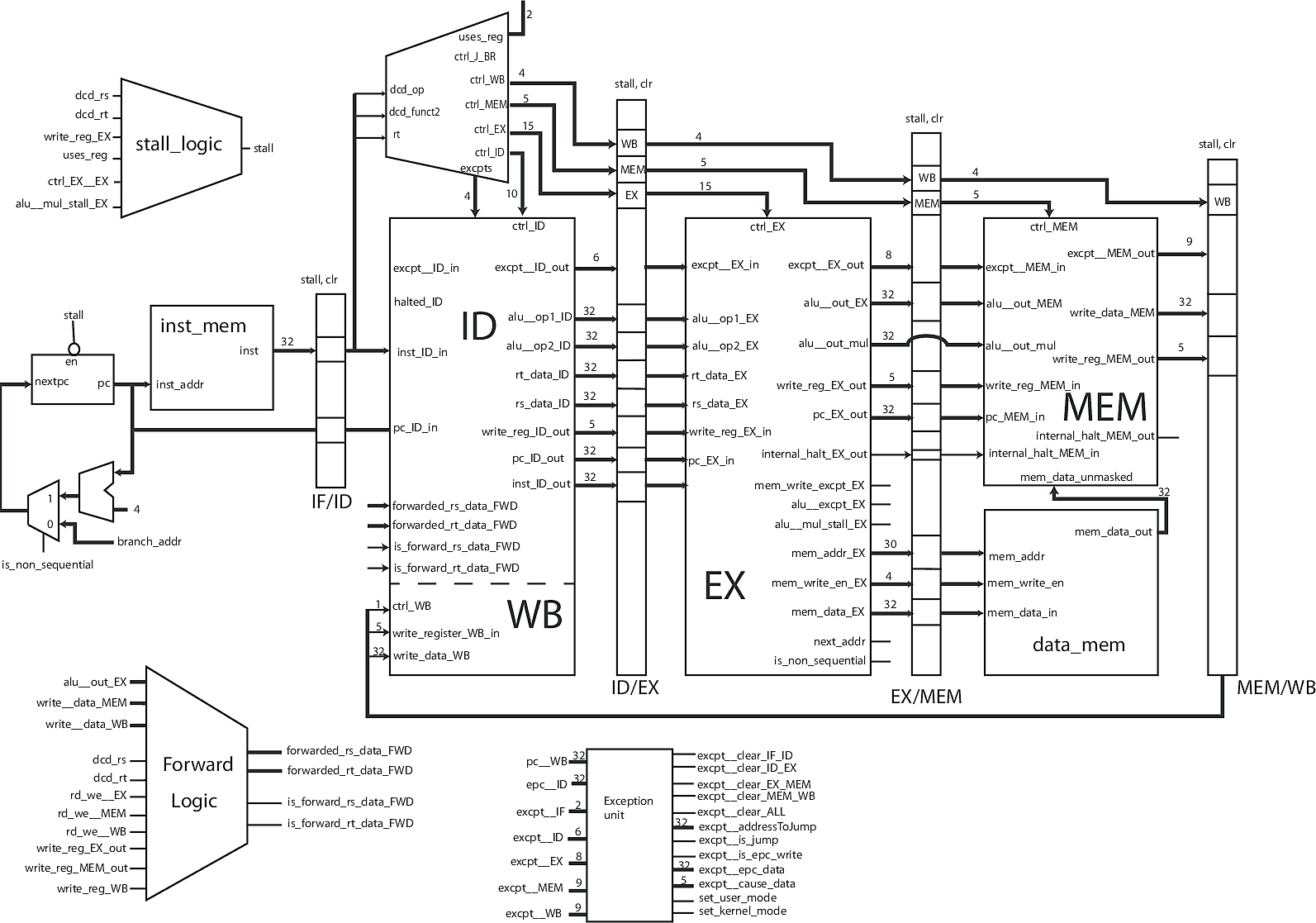 Pipelining enables higher clock frequencies, by creating shorter critical paths, and it also allows for multiple instructions to be computed simultaneously. Unsurprisingly, these advantages come with a trade-off. You need additional logic to deal with corner cases. The most common issue is what is called a data hazard. This occurs when an instruction has been executed, but has yet to be written back to the register file, and the current instruction needs the result of that calculation. This is when forwarding comes in. This module (source) simply takes the outputs of the EX, MEM, and WB stages, and replaces incorrect reads from the register file with valid values.

Sometimes, data hazards are impossible to fix with forwarding. There are times when the data isn't yet available, and the processor must wait in order to continue. For example, this would happen when an instruction reads from memory, and a subsequent instruction needs that value from memory. These events are detected with the stall module (source). The stall module places NOP (No Operation) instructions into the stages that must wait, until the hazard is resolved.

Exceptions happen in a processor for a variety of reasons. Something can go wrong (like an overflow or invalid memory read), you can have a cache miss, or you may want to implement privileged system calls to distinguish user and kernel modes. The exception unit (source) takes care of these situations. It reads exceptions from every stage and outputs controls that will set the processor into the correct state when an exception occurs. This includes nullifying the misbehaving instruction and any later instructions, jumping to the memory address of the exception handler (which is written in software), and returning control to the original program once the exception is resolved. This module does not store any state information, instead controlling the coprocessor in the ID stage, which stores the relevant addresses and status codes.

Although Decode and Writeback are two different stages in the pipeline, they share one of the most important parts of the processor, the register file, so they share the same module (source). The register file is an array of registers that holds the result of computations and reads from RAM. It is the fastest form of memory in a computer.

The ID stage is responsible for decoding an instruction into control signals that determine what the rest of the processor does. If an ADD instruction is decoded, this stage reads the two values to be added from the register file, and lets the remaining stages know how to handle the operands.

The WB stage is the simplest stage. It has an enable line, a value to write, and the address to write it to. It takes these inputs and writes the result into the correct register in the register file. 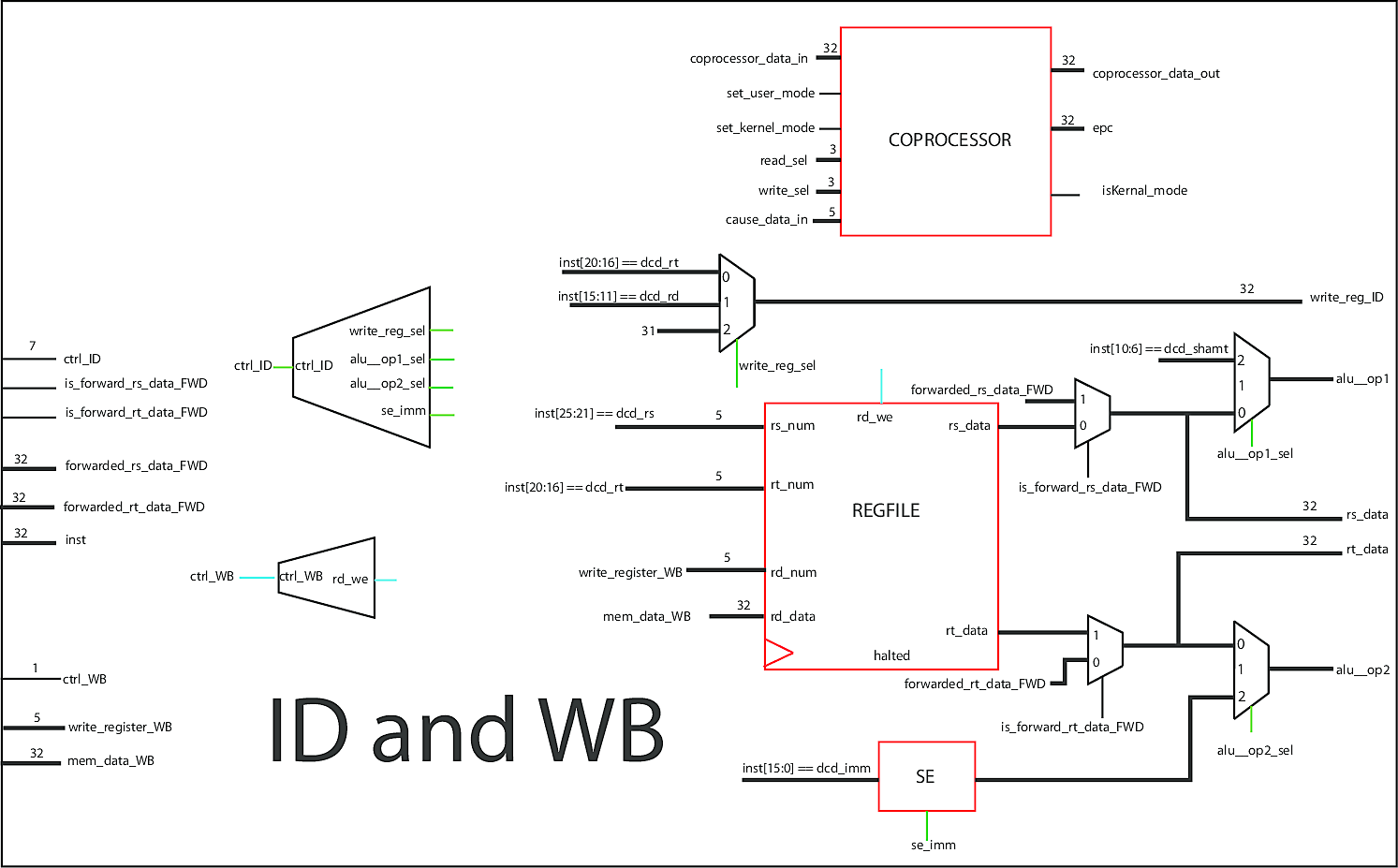 The instruction decoding logic has its own module (source), which is instantiated in the MIPS core. However, it is still considered part of the ID stage (it is the large demultiplexer above the ID stage). This module takes an instruction and determines what each stage should do, by sending control signals through the pipeline registers. This is where the magical translation between assembly language and physical signals occurs. 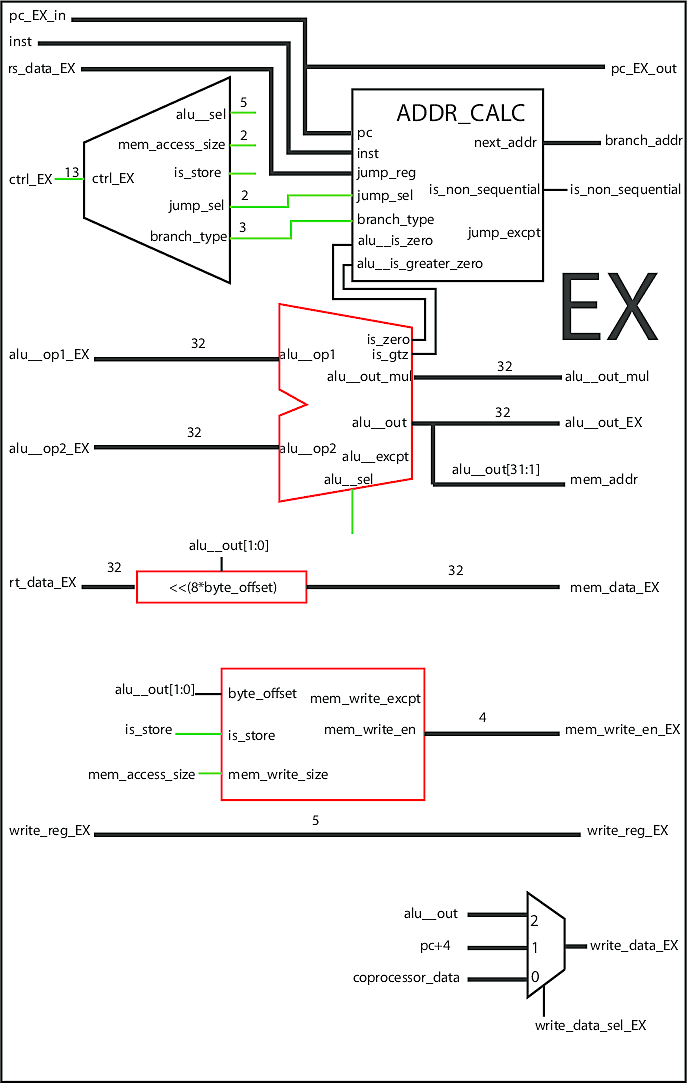 Instructions are calculated in the execute stage (source). If it's a simple arithmetic operation, then the result is computed. If it's a memory operation like a read or write, then the offsets and appropriate signals for the memory stage are calculated. This stage also determines if the next instruction is sequential or a branch, and calculates the next value of the program counter accordingly.

The ALU (Arithmetic Logic Unit) is the core block of the processor, doing all mathematical and logical operations. It is contained in the execute stage. An ALU takes 3 main inputs - two operands and a select line that is equivalent to an operator. The bulk of this logic is a case statement based on the select line, which returns the result of the desired operation.

For multiply and divide operations, we outsource the work to a pipelined multiplier coprocessor, which can perform these more complicated operations within one execute clock cycle. The ALU also supports some operations to help determine the next program address (with help from the address calculator).

The address calculator determines what the value of the program counter should be next, based on the current address, type of branch, and branch offset. It uses the ALU to determine if it's a branch or not. The result is sent to the Fetch stage so the correct instruction is fetched next. 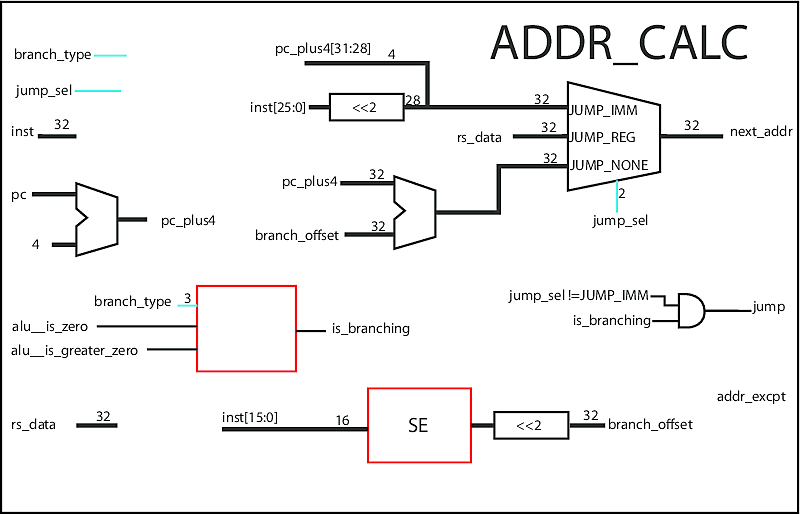 The memory stage (source) simply reads and writes values to memory. Only a small amount of data can be held in the register file, so most data is stored in memory (RAM). This stage is directly connected to RAM, and masks reads so that the appropriate bytes are sent to the writeback stage.

One of the most important abstractions in computing is virtual memory, which maps the physical addresses of memory to a linear array of addresses in software. This allows programs to assume that they are the only ones using memory, improves security, and sometimes lets programs use more memory than the system physically has via paging. This processor supports virtual memory, translating addresses in the MIPS core.

The mapping between virtual and physical addresses is done with a page table. However, going through memory to translate every address is inefficient and not practical. Therefore, a cache called a Translation Lookaside Buffer (TLB) is used to speed up the process. This cache returns the translation immediately, or if it's not found, raises a TLB miss exception. It's the same as other exceptions, except it goes to a different handler, which is tasked with loading the TLB with the translation from the page table.

You can't do anything useful with a processor without a program to run, and a useful program to start with is a kernel. The kernel I wrote in assembly is very simple. It supports exception handling and basic virtual memory management, along with system calls and a user/kernel mode. While basic, without these features, the processor would not work as expected.

The TLB is managed through software and the code below is the TLB handler along with a simple test case. When a TLB exception occurs, instead of being sent to the general exception handler, control is sent here. We're then able to read the page table (which is hardcoded in this case), and load the TLB with the appropriate values. Once completed, it returns with an ERET instruction and the processor executes the faulting instruction again. This time without a TLB miss.